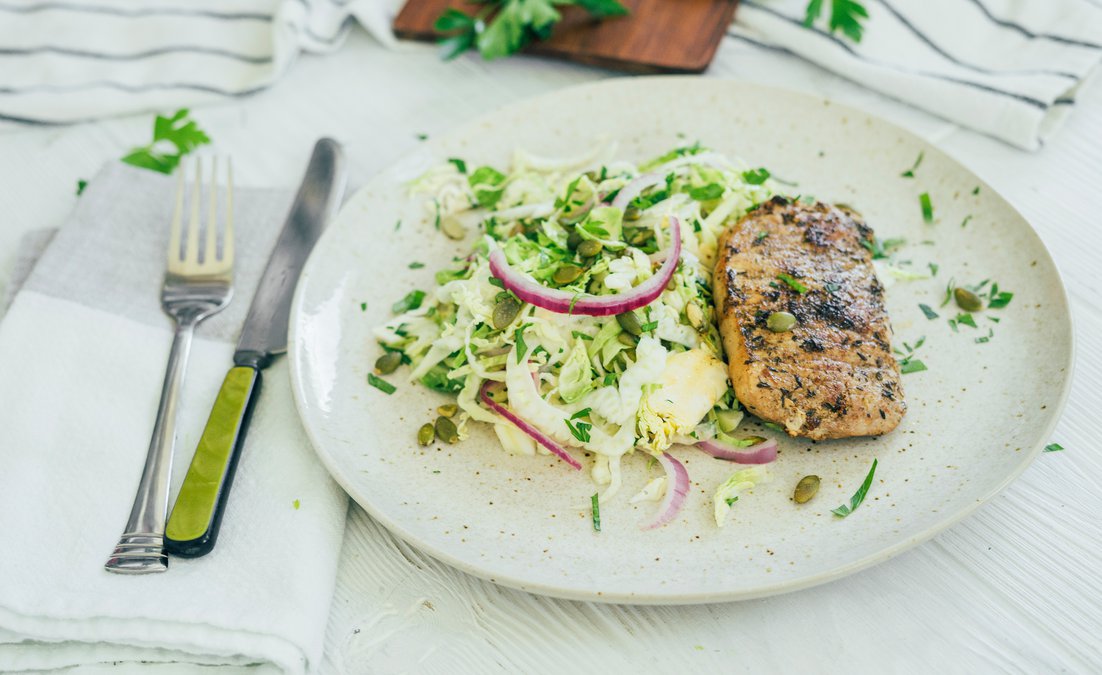 If you’ve been looking for an easy pork chop recipe, look no further. These pork chops with Brussels sprouts slaw is a quick, healthy, and tasty dinner option. You’ll love sinking your teeth into this delicious meal featuring succulent pork chops accompanied by a crunchy slaw of thinly sliced Brussels sprouts and shaved fennel tossed with apple cider vinegar. It’s a fast prep, low cal meal that will leave you satisfied and happy. 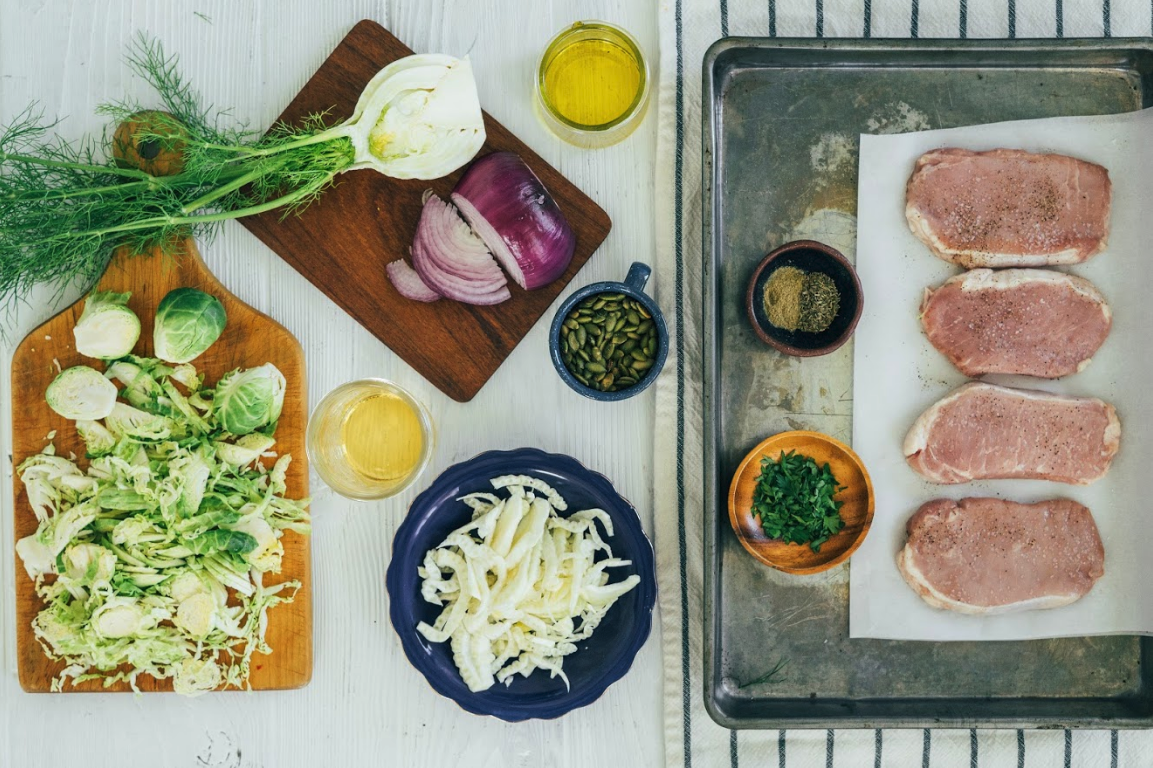 Should You Sear Pork Chops?

In a word, YES! The best pork chops have a good sear on them. So if you’re wondering how to cook pork chops, the answer is as simple as searing them in a pan. When you sear meat, you caramelize the natural sugars, which gives it a little crust and makes it taste amazing. No special equipment is required, you can get a good sear with easy skillet pork chops.

Seared pork chops are tasty, and getting a good sear is pretty simple. It all starts by bringing your chops to room temperature before cooking. Cooking cold meat creates more condensation and steam, so you end up boiling the outside of the meat rather than getting a crispy sear. Once your meat is at room temperature, or at the very least has been out of the fridge for 30-40 minutes, it’s time to cook it. The other seared pork chops tips are to get the pan really hot before placing the meat in it and to let the meat cook fully on each side before moving it. The high heat and steady cooking will give you the best sear on your pan-fried pork chops.

How Do You Cook Pork Chops Without Drying Them Out?

Nobody likes a dried out pork chop. Blech! But sometimes the perfect juicy pork chop can be elusive. The perfect pork chop recipe isn’t as tough as it seems. Pun intended. To cook your pork chop without drying it out, start by pulling the meat out of the fridge at least half an hour before cooking it. Allowing the meat to come to room temperature helps it cook more quickly and evenly.

Once you put your pork chop in the skillet, the only time you need to touch it is to flip it once, and to remove it when it’s done. Fussing with the meat too much releases moisture and will make the meat tougher. We recommend searing the pork chop on one side, flipping it, and then covering the skillet with a lid to cook the other side. This helps trap the heat in so it cooks gently and evenly.

The final trick is to let the meat rest for at least five minutes before you slice and serve it. Allowing the pork chop to rest lets the meat juices distribute evenly throughout the chop. With those three easy pork chop tips, you’re sure to have tender chops every time.

How Do You Shred Brussels Sprouts?

If you’re making a Brussels sprout slaw, there are actually a lot of different ways to quickly and effectively shred Brussels sprouts. Before you take your first slice, you need to prep the veggies. Start with washing the Brussels sprouts by running them under cool water to get rid of any visible dirt. Then, slice off the woody stems so when you look at the bottom of the sprout you can see the various layers of leaves. Next, remove all of the damaged, tough, or brown outer leaves. Then, you’re ready to shred.

You can shred Brussels sprouts by hand, in a food processor, or even in a blender. The prettiest, but the most time-consuming method is by hand. To do this, first cut each sprout in half from top to bottom. Then place the cut side down on a cutting board and slice each one crosswise from root to top. If you’re using a food processor, toss all of the prepped Brussels sprouts in the bowl with the slicing attachment on and have at it. The blender is much the same. Put all of the sprouts in and pulse the blender until you’ve reached the desired consistency.

Are Brussels Sprouts Healthier Than Cabbage?

Brussels sprouts may look like shrunken cabbage heads, but they’re actually very different in a lot of ways. They’re in the same family, think of them as being cousins, but they bring slightly different things to the table nutritionally. 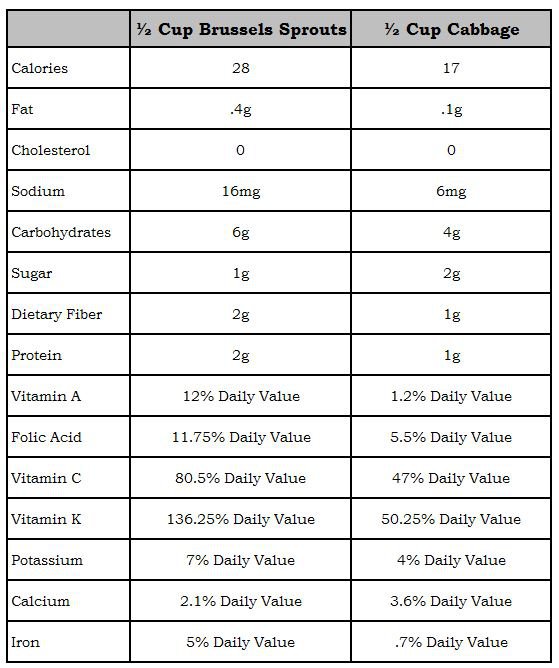 Don’t miss out on more delicious recipes—follow us on Instagram and Facebook to see the newest recipes.

Xyngular’s One Of A Kind Healthy System Recipes

The Xyngular Guide To Weight Loss 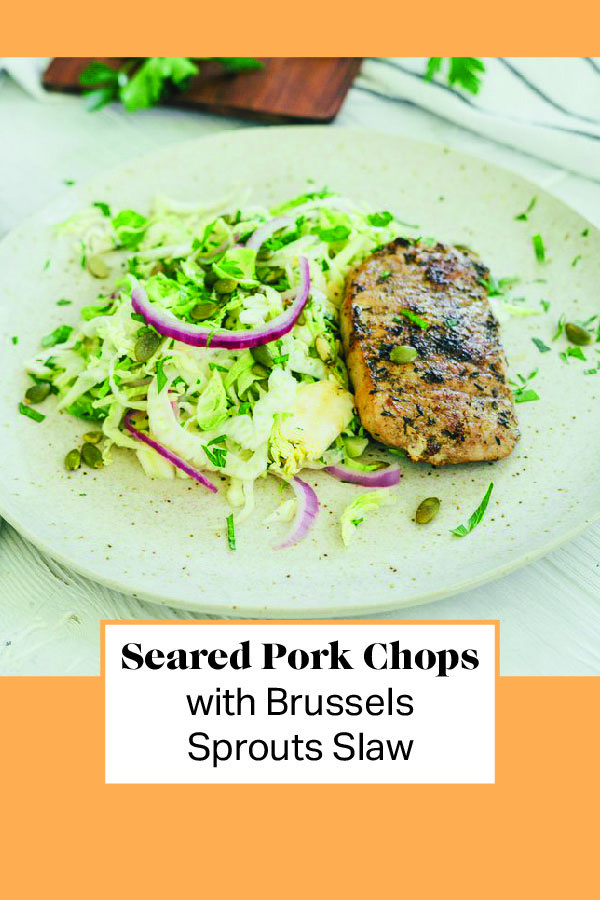 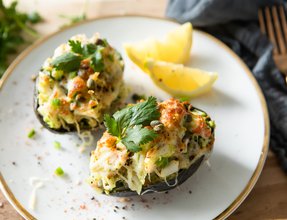 Avocados aren’t just for guacamole! Take advantage of this healthy fat wonder for a delicious and light meal that might even satisfy your guacamole cravings. Cilantro, serrano peppers, and pepper jack give this crab avocado recipe a delicious extra kick! 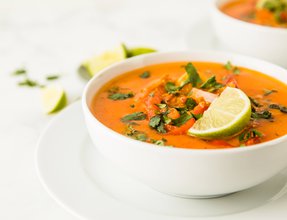 Don’t be fooled by boring “healthy” food. There are no sad chicken breasts with steamed broccoli around here.